Since the early 1980’s, The Wexner Foundation has been a pioneer in the field of Jewish private philanthropy. For 35 years, The Wexner Foundation has never wavered from its focus upon Jewish leadership in the Jewish world and Israel. The Foundation’s professionalism, standards of excellence, and strong relationships with Jewish communities and organizations have created a model of practice for Jewish private philanthropy that has stood the test of time.

In the early 1980’s, Les Wexner reached the conclusion that what the North American Jewish community and the State of Israel needed most was stronger leadership. When established Jewish organizations showed relatively little interest in the development of leaders, Les decided to take up the mission, and The Wexner Foundation launched its own leadership initiatives.

Since those early days, The Wexner Foundation has been a pioneer in the field of Jewish private philanthropy, a field that has grown to include dozens of foundations that devote themselves on a national and international scale to the needs of the Jewish people.

In the last decade, the Foundation has actively pursued partnerships with communities, foundations, philanthropists, Alumni, federations and other stakeholders in our work. For 35 years, The Wexner Foundation has never wavered from its focus upon Jewish leadership in the Jewish world and Israel. The Foundation’s professionalism, standards of excellence, and strong relationships with Jewish communities and organizations have created a model of practice for Jewish private philanthropy that has stood the test of time.

In the early 1980’s, the North American Jewish community and the State of Israel were in a period of transition. The generation directly motivated to Jewish leadership by the Holocaust and the founding of Israel was aging, and the next generation of rising leaders was in search of purpose and motivation. Les Wexner, a successful merchant and committed Jewish volunteer and philanthropist, reached the conclusion that what the Jewish people needed most at that moment was stronger leadership. When established Jewish organizations showed relatively little interest in the development of leaders, Les decided to take up the mission. With his support, The Wexner Foundation launched its own leadership initiatives to meet the pressing need for education and inspiration among leaders in the North American Jewish community and in Israel’s public sector.

The Wexner Foundation Founded
Two separate organizations were created to carry out the mission of strengthening leadership for the Jewish people. The Wexner Heritage Foundation, co-founded by Rabbi Herbert Friedman z”l, was founded to strengthen volunteer leaders in the North American Jewish Community. The Wexner Foundation, co-founded by Rabbi Maurice Corson, was created for emerging professional Jewish leaders in North America and mid-career public officials in Israel. The Foundation’s three original leadership initiatives emerged as a new model for serious leadership training in Jewish life and in Israel.

Wexner Graduate Fellowship Program
This program strengthens rabbinical/cantorial students and graduate students in Jewish education and Jewish professional leadership programs, as well as academic Jewish studies. In its early years, the Foundation established a grants program for academic institutions of all types to build and improve training programs for Jewish community professionals. Nearly 600 outstanding Jewish professional leaders from a wide array of religious affiliations and professional groupings have participated in the Wexner Graduate Fellowship/Davidson Scholars Program.

Wexner Israel Fellowship Program
This program helps to support up to 10 outstanding Israeli public officials earning their Mid-Career Master of Public Administration (MC/MPA) at Harvard Kennedy School. The goal of the Fellowship is to provide Israel’s next generation of public leaders with advanced leadership and public management training. More than 280 Israeli public officials have participated in the Israel Fellowship, including leaders who have gone on to become Directors General of government ministries, Generals and Commanders in the Israeli military and top advisers to Prime Ministers.

From 1990-2011, the Foundation began engaging in partnerships with communities and foundations that shared our commitment to invest in leaders for the Jewish world. As the three flagship Wexner leadership programs expanded and deepened their impact, leadership transferred from its founding presidents to Larry Moses (The Wexner Foundation) and Rabbi Nathan Laufer (The Wexner Heritage Foundation). During this period, Abigail Wexner became involved in the work, and she and Les served as co-chairmen of the Foundation, providing strategic direction in addition to funding.

Community Investment
The Wexner Heritage Program began coinvesting with communities. Throughout this time, the Foundation engaged in partnerships with communities and foundations that shared our commitment to invest in leaders for the Jewish world.

Since 2011 and under the leadership of Rabbi B. Elka Abrahamson, the Foundation added four additional leadership initiatives, doubling down on existing populations and expanding into new areas of impact.

Wexner Field Fellowship Program
This program was created in partnership with the Jim Joseph Foundation to focus on developing promising Jewish professionals’ leadership skills while enveloping them in a rich network of colleagues. Through in-person, intensive conferences and virtual meetings, Wexner Field Fellows are exposed to Jewish educational and professional growth opportunities while addressing their unique needs of career progress.

Wexner Service Corps Program
The Wexner Service Corps (WSC) was launched in 2013, a vision inspired by the work of Hannah Wexner, as she was seeking meaningful service work as a high school senior. This program inspires and unites Columbus-area Jewish teens to engage in service learning. The Service Corps is open to high school juniors and seniors to participate in a year of monthly volunteering and Jewish learning culminating in a week-long service trip. A select group of Corps members can return for a second year to join the Senior Leadership Cohort (SLC). Columbus Jewish teens have cumulatively put in thousands of hours serving both the Columbus community and the cities it visits.

Wexner Senior Leaders Program
This program offers an executive leadership experience that leverages the training and scholarship of the Harvard Kennedy School to strengthen Israel’s public service leadership and spur innovative, collaborative projects across government departments and agencies. The program aims to strengthen skills and design strategies for leading transformative change, acquiring new tools for better decision making, and developing strategies for some of Israel’s most promising and influential senior leaders in the public sector. More than 250 executives have taken part in the Senior Leaders program. 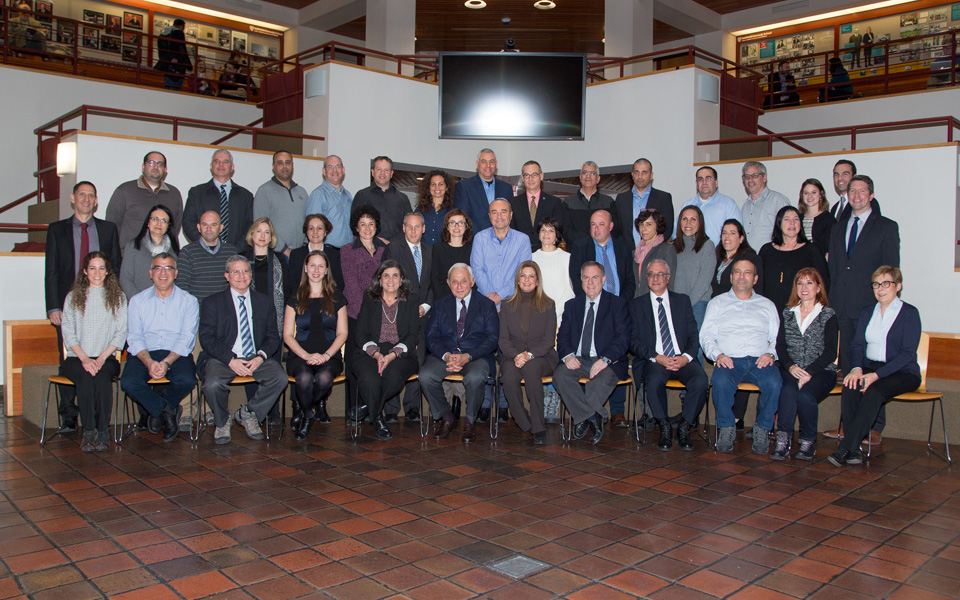 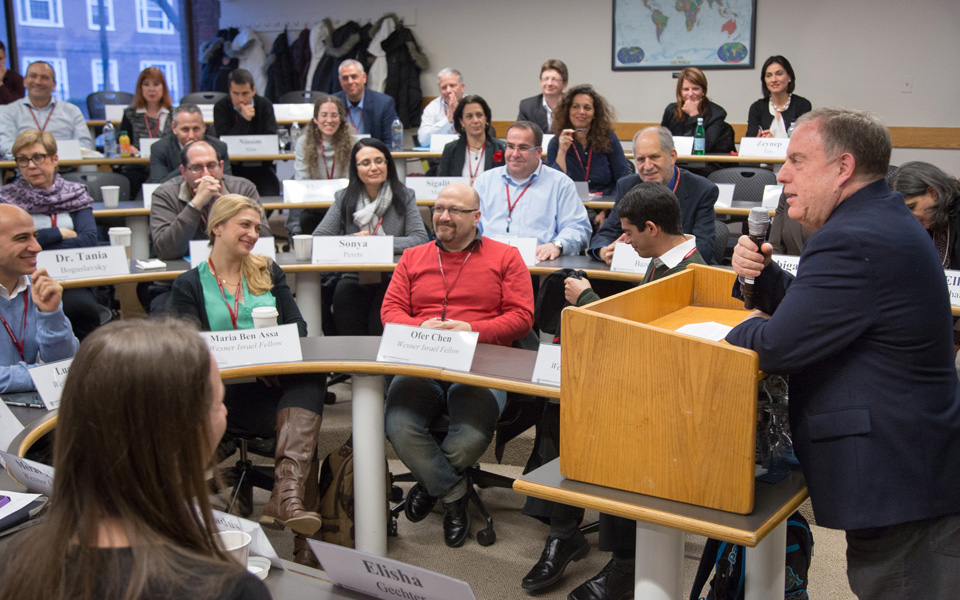 30th Anniversary
In March of 2015, we celebrated The Wexner Foundation’s 30th anniversary with a gathering that was equal part reunion, celebration, learning and visioning. It acknowledged our historical achievements and our promising future. About 1,300 Wexner Alumni from North America and Israel came together for two intense days of programming that was punctuated by a spirited gala dinner where we welcomed the Honorable Shimon Peres, z”l and danced the hora to the music of the Klezmatics. The Anniversary revealed to us both the life changing reality of participation in a Wexner Program and a new vision for our collaborative possibilities as a Foundation. Videos and presentations from our celebration can be found here.

Wexner Summits
Building on the energy of the 30th Anniversary, the Foundation launched Wexner Summits: The Network in Action. Summits offer platforms for select North American and Israeli Alumni across five of our programs to engage in deep dialogue, learning, problem-solving and collaborative work. Allowing our network of leaders in the Israeli public sector and in both the professional and volunteer ranks of Jewish life in North America to leverage one another, Wexner Summits empower and mobilize a cadre of change agents who work in teams over the course of a year to address major challenges facing the Jewish people and Israel.

The Work Continues
Supporting our 3,000-member strong network drives us every day. Whether meeting via computer screen or in person, our work with world-class faculty, innovative technology and important and relevant curriculum propels us forward.