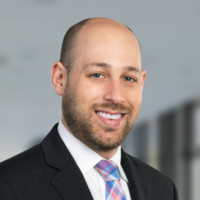 Avi has always been involved in his Jewish communities as a lay leader, whether that is his synagogue or Camp Ramah in Wisconsin. While serving as the co-chair for his synagogue’s Rabbinic Search Committee, Avi felt an internal pull to orient his career toward mission-driven work. Ultimately, he decided to leave the legal world to become the Executive Director at Congregation Agudas Achim in Columbus, Ohio, where he oversaw the entirety of the synagogue’s administration.

When not at work, Avi enjoys spending time outside with his wife Sarah and their children, and trying to recapture the glory years of his athletic career by playing various recreational sports.

Apply now for the 2023 Class of the Wexner Senior Leaders.
Applications are also open for Class 34 of the Wexner Israel Fellowship.