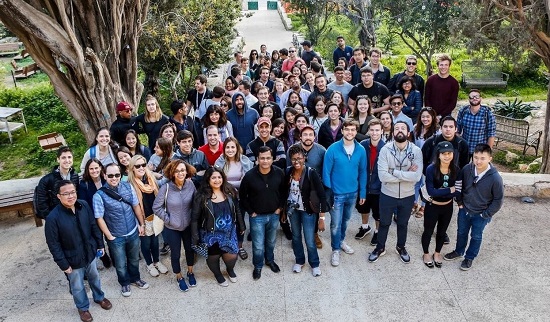 I grew up in a family in which the Holocaust was always present. My brothers and I used to play hide-and-seek where the Nazis were after us. I had the perfect hideout in my closet. I practiced so many times the shortest way there; I was ready and I had my plan — the Nazis won’t catch me!

My main lesson from the Holocaust is that there are people always trying to kill us and nobody will help us, so we must always be strong and we must never let it happen again. The second lesson is that it is so easy to lose your humanity, as most people did. But some did not, and risked everything they had to act on their morals and protect the hunted people. We must never lose humanity, no matter what the cost.

In a way, the deep rooted paradox in the tension between the everyday striving to survive and the strong commitment to being a moral human exists in myself and all Israelis, and is tangled in our nation’s existence. Israel has the most robust economy and the strongest army in the Middle East and occupies territories. At the same time Israel sends massive aid and rescue teams to all locations around the world that suffer from disasters, even to its enemies such as Syria.

Coming to Harvard, I felt that for some people I wasn’t Goni the person, I was Goni the Israeli, the strong oppressor. This is all they needed to know to figure me out. I tried to resist and explain that there is so much more to me and to my country, but it was very hard.

This was my motivation to join the “Israeli Trek” leadership. The Harvard Kennedy School supports student-led “Treks” to explore other countries and cultures, supplementing our classroom learning with on-the-ground experiential learning. I volunteered to help organize the Israeli “Trek” to encourage my fellow students to learn first-hand that Israel is not that one-dimensional figure they learned about from the media. This was by far my best decision this year!

Our trek’s goal was total exposure to our homeland – with both its miraculous achievements and its terrible illnesses. We wanted to show the diverse and colorful picture in order for them to understand the complexity and the depths of the country.

During the intensive week we met the Ultra-Orthodox from Jerusalem an hour before meeting the Bedouins in the desert. We explored Ramallah and spoke with Jibril Rajoub about the occupation, right before a conversation with Oded Ravivi about the co-existence of the Israeli settlers and the Palestinians in the West Bank. We went to the Syrian border and had an overview of the horrible war in Syria, and straight from there, met the leaders of “start-up nation,” and continued with the vibrant night life of secular Tel-Aviv. We visited a kibbutz, the Gaza Strip, the Old City of Jerusalem and much more.

We walked our nation’s 3500 years of history – From the Kotel to the desert fortress of Masada, and to the places where Christians believe Jesus was crucified, buried and resurrected and where Muslims believe the Prophet Muhammad ascended to heaven.

During the long hours on the bus we encouraged the trekkers to ask hard questions and we had fierce conversations that led to insights about ourselves and about our country. It is not easy to give space and respect to narratives that contradict your basic beliefs. Each trek leader was, in turn, appalled at different times with something being said. But it was worth it. We learned. We exchanged thoughts and experienced curiosity and real listening. This was also a liberating experience — we have nothing to hide and are proud to show it all.

During this week I gained fresh, challenging perspectives with which to see my country and I reinforced my love and ties to it through my fellows’ eyes and most important — I gained friends for life.