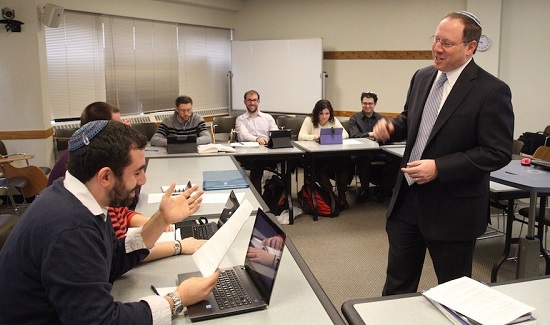 The Jewish community and our Wexner community mourn the tragic death of Rabbi Aaron Panken, Ph.D., z”l. Rabbi Panken, 53, President of Hebrew Union College-Jewish Institute of Religion and Wexner Graduate Fellowship Alum, Class 8, was a cherished colleague, brilliant teacher and friend to so many. Our sense of loss is overwhelming. If there is one strong river of truth flowing through the many, many memorials being written and spoken about Aaron, it is that he possessed the ability to make each and every person he met feel as if the relationship he had with you was special. He was the consummate mensch; “the best of us” said his dear friend and colleague Rabbi Michael White. Rabbi Panken was a beloved faculty member for the Wexner Heritage Program. One Heritage student remembered him as a kind, sweet, Talmudic master — always accessible; reliably authentic. He was a one of a kind human being; caring and ceaselessly curious. When he stepped into the role of HUC-JIR President in 2014, he articulated his vision beautifully. In Rabbi Panken’s words:

His dreams were just unfolding thanks to Rabbi Panken’s remarkable leadership. We are bereft that he will not live to see the fullness of his dreams realized. We are the grief-stricken disciples of our Aaron. His students, colleagues, friends and the community he served tirelessly and with dignity are deeply committed to carrying his dreams forward. His legacy is placed into our hands and his spirit infuses our visions. The Wexner community extends heartfelt sympathies to Aaron’s wife Lisa Messinger, a Wexner Heritage Program Alum (New York 4), his children Eli and Samantha, his parents Peter and Beverly Panken and his extended family. May you find comfort among all who mourn…and there are so many Wexners among them… in Zion and Jerusalem.