The photo above is from the author and shows her first minyan dinner in her condo. “Nobody could leave their seat, but it was so much fun.”

At the 2018 Madregot Institute, I gave a speech about my vision for the future of Judaism based on my personal narrative. The room was full with 200 Wexner Heritage Members, spouses, staff and guests. I got ready for the speech with a coach, by rewriting and editing, and I practiced in my hotel room. Despite all of that, I was still very nervous. Everything I said on stage was on my paper, except the line that got the biggest laugh.

You can’t take your cats to the mikvah.

You can’t take your cats to the mikvah was an improvised line to release the pressure in the room. I was describing my reality. I’m a convert to Judaism and a single, childless woman. In a world of Jewish organizations obsessed about the next generation of Jews, I have no place.

My Jewish family is just me (tension,) because you can’t take your cats to the mikvah (release.)

Gadsby’s description of comedy can be used to guide us as leaders. It is our job to identify tension – in our organizations, our communities, and our world – and find a solution that provides release. Sometimes there are even laughs along the way.

When I first converted over 13 years ago, I was very active in the Jewish blogosphere. I had my own blog and I commented on dozens of posts a day. It’s where I built my Jewish community beyond the walls of my synagogue. In a comment thread, I got into a lively debate (ahem, a flame war) with an Orthodox blogger questioning where Reform Jews learned the mitzvot. He posited that the Reform movement was full of lazy people who didn’t even have a place to learn the mitzvot if they wanted. I knew that I’d learned plenty as an adult seeking conversion, but was willing to admit he might have a point despite painting the movement in broad strokes.

Instead of fanning the flames and making even more tension, I created a program with my rabbi called Itza Mitzvah. Nearly every month for six years, we went to a bar with a group of 20-somethings, who became 30-somethings as the years went on, and studied a different mitzvah. Each month he helped us answer three core questions:

Rabbi Zedek expected us to ask about various levels of keeping kashrut, but was surprised that we asked him about using the mikvah or the use of a mechitza in synagogue. For me, the tension was taking the Reform movement seriously, which asks us to understand the mitzvot and then make informed, personal decisions.

A mechitza is something that is not meaningful to me, but I’m grateful to understand why people choose synagogues with separate seating. The mikvah is meaningful to me. So much so, that when I found out I needed a hysterectomy, I grieved the loss of the chance to observe Taharat HaMishpacha – an observance generally reserved for married women. To relieve the tension of loss, I found release with resources from the mikvah staff at Adas Israel in Washington DC and Mayiim Hayyim in Boston. I found a prayer and permission to go to mikvah before my surgery to mark the end of my cycles.

Over and over through my life with the Jewish people, I have found tensions and then found a solution to release the tension. My synagogue, like many, is grappling with the problem of space that sits empty for too much of the week. To release this tension, we are building a programming body called 5959 to fill the space with energy and people.

As a convert, I’m not immune to the tension of the December Dilemma. What am I supposed to do with my childhood Christmas traditions now that I don’t celebrate in the holiday in my house? One friend uses her beloved Christmas Nativity scene for a table-top Sukkah scene. At my dad’s insistence, I turned our tradition of looking at the lights on Miller Drive into an illustrated children’s book imagining the life of a Jewish family living on the cul-de-sac. I gave out homemade copies of Hanukkah on Miller Drive this year and, fingers-crossed, it will find its way to bookstores next year.

Finally, ten years ago, my friends and I felt a tension between wanting to have dinner together and attend services, but 8 PM services made that impossible. We released the tension by starting TBD Minyan. We are a living room minyan that meets once a month for a meal and lay-led services. Through building programs and community, I built my chosen Jewish family. It includes Jewish friends, their non-Jewish partners and their Jewish toddlers.

And my cats, even though they never went to the mikvah. 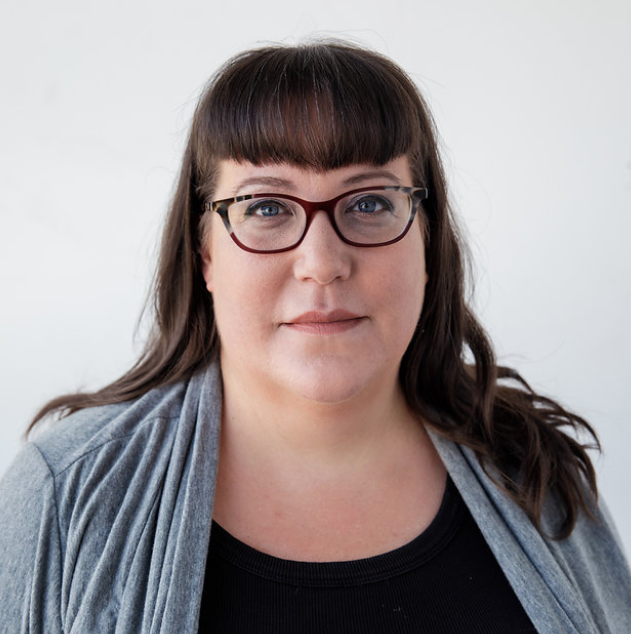 Wexner Heritage Member Leah Jones (Chicago 17,) launched her own company, Natiiv Facilitation, LLC, focused on encouraging leadership and bringing people together in March 2018. Leah has a Master’s in Health Communication from Northwestern University. She is a co-founder of TBD Minyan and created the educational program Itza Mitzva. Leah is a member of Emanuel Congregation, a 5x participant in the ROI Community Summit in Israel, and a member of the Kenissa Community for leaders of emerging Jewish communities.