Wexner Service Corps Kicks off Year on the Ropes

Wexner Service Corps Kicks off Year on the Ropes 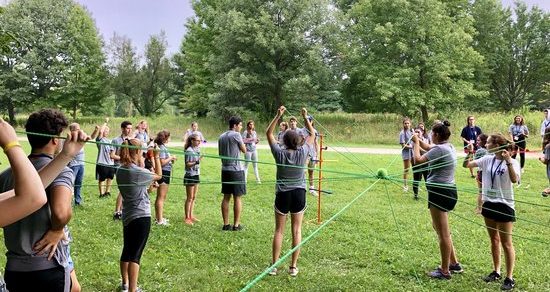 The Wexner Service Corps is a program designed to inspire and unite Columbus-area Jewish teens to engage in service learning. The Service Corps is open to high school juniors and seniors to participate in a week-long service trip, followed by a year of monthly volunteering and Jewish learning.

To kick off the new year for Wexner Service Corps, we headed to Summit Vision, a local team-building activity center, to work on developing our group’s sense of teamwork and unity. We were split into three groups and I was assigned to the Hippopotamuses. Our first station involved a tennis ball and a ring with 10 pieces of rope extending from it. The tennis ball was sitting on a stand and our job was to lift and lower the ball as a group without dropping it. At first it was easy, but after a few successful maneuvers, half the group was instructed not to speak and the other half had to close their eyes. This made it a bit trickier and required us to communicate in creative ways, such as pulling on the ropes to let our teammates know which direction to move.

After this exercise we headed into the woods to the high ropes course for The Great Swing challenge. We had to climb up to a post that was about three stories high and then jump off the side, trusting that the cables and ropes would hold us as we swung across the forest. Afterward, as a group we reflected on what we took away from this exercise. For me, I learned to not be afraid when trying something new that may be a little scary or overwhelming at first. Some of my friends suggested that this activity required really knowing yourself and your strengths and weaknesses, and that sometimes it is okay to decide not to do something that doesn’t feel right for you.

The next station we went to was the balancing plank. For this activity we had to get everyone in our group of 13 onto a large, unstable piece of wood without it touching the ground. This challenge took a lot patience and we had to learn from the mistakes that we made, but eventually we managed to get everyone onto the platform without it hitting the ground. We were then given further challenges to switch places with each other and eventually get everyone off the wood as well. We talked about our different attempts and how we communicated with each other as we formulated our plans. We saw the way in which overcoming a challenge can require working together, “shoulder to shoulder,” and building off of each other’s ideas in order to find the right solution.

After this we moved onto a relay race. My team made a plan for the race before we started our first timed attempt. We practiced each station and developed strategies to make them as fast as possible. Because of this our first run was just over a minute. Our group leader told us that groups often jump right into their first attempt without planning and end up taking anywhere from five to eight minutes for their first run. After seeing how great we did on the first try, she challenged us by telling us that the record was 18 seconds, and it became our goal to beat that record. Our next run was a little faster at 55 seconds then we got it down to 30 and then 22. Rather than moving on to a different activity, we decided to make one final attempt and on our last run we got it down to 17 seconds! This taught us that perseverance and planning allows you to succeed. We also saw how dividing up our group and assigning people to different stations helped us become more efficient.

After we finished all of our stations, we gathered together for lunch and Jewish learning. We talked about a kind of a weird subject that many of us had never heard of before. We learned about the Biblical ritual called Egla Arufa, that if a person was found dead and no one knew who he/she was, the nearest town had to take responsibility to bury the dead body and to perform a specific ritual. This town had to sacrifice a calf who hadn’t worked yet, on a field that hadn’t been farmed. We talked about what this symbolized and how this related to us. To me, the calf symbolized the murder victim. Just as the calf had not yet worked or shown its full potential, we don’t know this person’s role in their community and we don’t know their potential or what they could have achieved if they hadn’t been killed. This relates to me because it taught me that I have no clue what is going through another person’s head or what their potential is, so I should not judge them before I meet them and get to know them. I also learned that you never know who someone is by just looking at them from the outside, which I think is also what this story is about. In order to really understand people, we first have to see them, meet them, and get to know them better. Another lesson from this case is that when the townspeople found the anonymous victim, they didn’t know who it was, which means that they didn’t know how much money the person had, or how much power, or how many friends or family members. Nevertheless, they treated the body with respect and dignity befitting someone important. We also learned that even though none of the people involved in this ritual actually committed the murder, they were still responsible to take care of the body and atone for the death. In our communities today, we are not always guilty of directly hurting others or causing them harm, but as a society we are responsible to take care of those in need and who could use our help. Overall, our experience at Summit Vision and discussing these ideas as a group will help us strengthen our group as a whole and help us continue to grow as a team. After seeing how well we worked as a group and what we are able to achieve, I believe that we are going to have a great year of service and giving back to our community!

Jessie Goldberg is a junior at Upper Arlington High School and a member of Congregation Tifereth Israel.