A Solar-Powered Light Unto the Nations

A Solar-Powered Light Unto the Nations 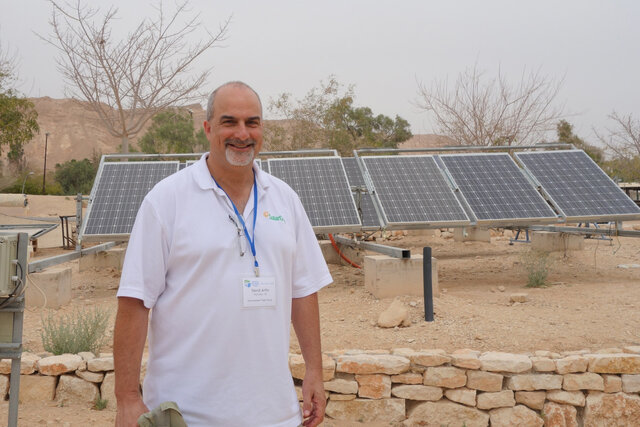 The author at the Arava Institute for Environmental Studies, Kibbutz Ketura.

I’m a clean energy entrepreneur. I am also a proud Jew. I confess that when Wexner approached me to ask how my Judaism inspired me to become a clean energy professional – I felt intimidated. How might my Jewish lens inform my career and communal decisions?

For me, being a Jew in our complicated and inter-dependent world demands applying guiding principles to address the key issues of our time. Thus, while values such as welcoming the stranger, not placing a stumbling block in front of the blind, and freeing the captive are eternal pursuits, there are circumstances that that also demand that we expand our pursuit of justice to the central issue of the day. One such value in Judaism as well as in other religions, is extraordinarily far-reaching as it expands time and space, and that to be stewards of the planet so that current and future generations can thrive. But climate change as manifested by rising oceans, catastrophic weather patterns, and severe drought, place this in jeopardy. Our planet needs our attention.

The Torah, Talmud, and our rich tradition emphasize protecting our environment over which we have “dominion” (v’yirdu). From our creation story, we are created in the image of G-d and stewards of the glorious earth we inherited, as it states in Genesis 1:16:

And God said, “Let us make Man (humanity) in our image, after our likeness. They shall rule the fish of the sea, the birds of the sky, the cattle, the whole earth, and all the creeping things that creep on earth.”

Of course, the menu of responses of what we can do to preserve the environment can overwhelm those with the best intentions. Environmental stewardship can take many forms. Do we focus on water? Fire prevention? Greenhouse Gas emissions? Eating less meat? Going solar? Driving electric cars? Composting? As trying to do all of the above at once can be paralyzing, I have chosen in my professional endeavors to focus on generating and storing clean energy and can trace my motivation to two core drivers.

I grew up in a politically aware household with a deep connection to Israel. My memories of the 1973 Yom Kippur War and subsequent oil boycott helped me to understand that energy dependence on petro-dictators represented a threat to Israel’s existence, to our “western values,” and possible reemergence of antisemitism around Europe and the West as we waited in line to fill our gas tanks. It was not far-fetched to worry that the Jewish state could be sold out by the world community in the interest of ensuring the free flow of oil that lubricates every nation’s economy. My petro-centered view was subsequently captured by Tom Friedman who chillingly pointed out after the September 11th terrorist attacks that we, in effect, funded both sides of our War on Terror. Whether the source is from the likes of Iran, Russia, or China, that energy dependence on rulers with evil intentions represents an enduring threat to global human rights and to Israel.

I also grew up in California as the modern environmental movement of the 1970’s took hold and evolved and as the facts about climate change emerged in the last two decades not just in scientific journals, but in our everyday lives. The “new normal” expectation of devastating wildfires, hurricanes, floods, and extensive droughts increasingly impact lives all over the world. Using a narrow Jewish or broader humanitarian lens, the upheaval and unprecedented migration of populations from drought-stricken countries and from rising sea levels will have a major impact on lives and governments – Syria was just a tipping point. And we expect even greater human migrations as a consequence of accelerating rate of climate change. I now believe we are at a “generational moment” where just as my cohort looked at its elders to ask what they knew about and did, or did not do, during the Holocaust or the early Civil Rights movement, our generation will be held accountable for what we did to address the profound changes to our climate.

Working on clean-tech solutions fills me with meaning and connects me with people and communities who work passionately to protect the planet. I also think Jewish environmental activism provides a critical entry point for a younger generation of Jews who wish to apply our values to a universal cause and form natural connections and coalitions with others based on common concern about the well-being of our planet and the impact we can have. 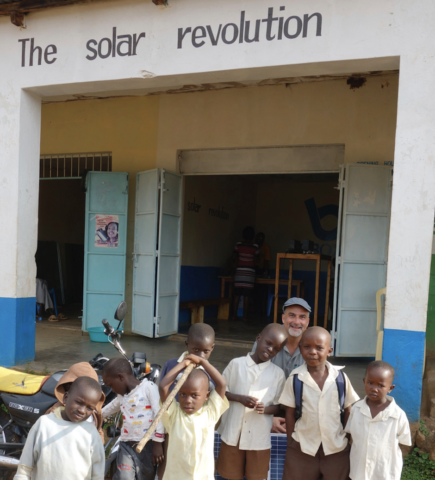 My professional journey into clean energy was a mid-career one and inspired by former Vice President Al Gore’s 2006 documentary, An Inconvenient Truth. I wanted to contribute something, but I’m neither an engineer nor a scientist who can build better things. Rather, I’m a serial entrepreneur with a public policy background who enjoys creative thinking to bring seemingly disparate parts together. So I invented a business model that enabled homeowners to adopt solar power in unprecedented numbers.  I am confident that market-focused solutions combined with advocating for forward-looking public policies can address the growing and severe challenges of the climate crisis and I encourage my fellow alumni to join me to create and support new business models that shift the risks and rewards of adopting clean technologies. A few of the things I’ve worked on include building community battery storage in New York City, helping farmers in France and rural villagers in India adopt cleaner technologies that enhance their lives, stabilize the electric grid, and bring economies of scale to technologies that lower our collective carbon footprint.

In my volunteer activities, I became involved in the Arava Institute for Environmental Studies that fosters regional cooperation on environmental issues and can be a “light unto the nations” as they bring the solutions developed in the arid Arava to the environmentally challenged Middle East. I’m also co-chairing my synagogue’s new environment task force that will work to achieve the Hazon Seal of Sustainability. Likewise, I have also had the opportunity to work with the U.S. State Department and visit Angola, Palestine, and Israel, where I provided tools to policymakers, entrepreneurs, financiers, and students who want to build their own clean ecosystem and to grow their solar energy industry.

Reversing climate change is a multi-dimensional, multi-generational task. Energy transition will require new policies, technologies, communal thinking, and creative solutions. Our community will need to lead through its actions, advocacy, and intentional leadership. This generational endeavor will need to confront and overcome narrow economic interests, conspiracy theorists, anti-globalists, and haters of different stripes.

I’m proud and excited about new business models I’ve helped to create that accelerate adoption of clean tech. But I know that by themselves, my activities are a drop in the ocean. But with the combination of creating innovative solutions for homeowners and businesses to adopt clean technologies, plus supporting next-gen leadership in our community and institutions like the Arava Institute, students, researchers, policymakers, spiritual leaders, advocates, and practitioners will address a central issue of our time: “Did you know the climate was changing and what did you do about it.” As Rabbi Yitz Greenberg, one of our Wexner Heritage Program teachers, wrote:

Rabbi Tarfon teaches: “Do not be arrogant; do not think that you alone can finish the job. Trust in your children and generations yet unborn to take up the task. Know that you are part of the living chain of people who have dreamed, worked for a better world and carried on this mission for four thousand years in an unbroken covenant.”Perhaps this is our (solar-powered) light unto the nations. 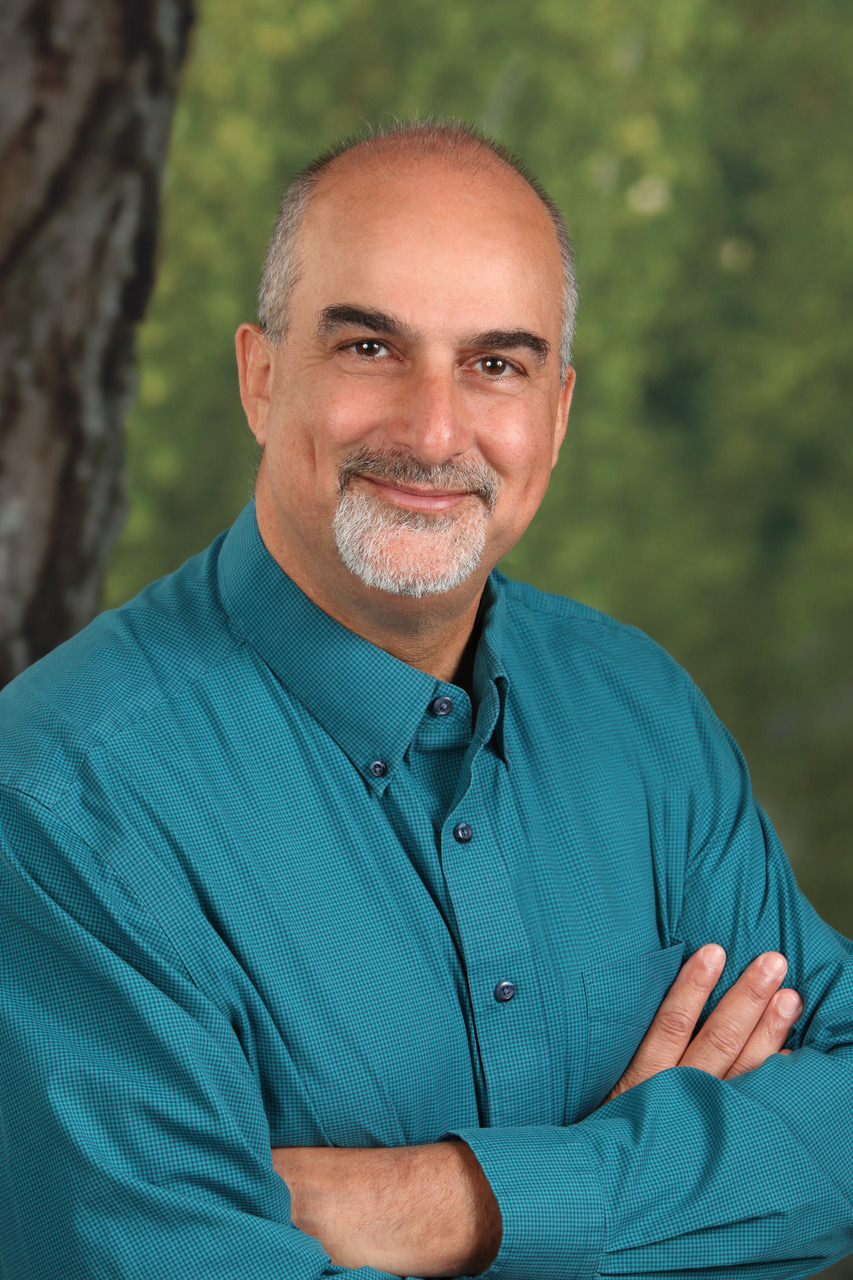 WHP Alum David Arfin (San Francisco 3) is the CEO of NineDot Energy and a globally recognized leader in creating innovative finance offerings that accelerate the adoption of renewable energy, energy efficiency, and other clean technologies.