The Dichotomy of Choice

The Dichotomy of Choice

When I was younger, I told myself that I would never visit Germany. Given my family history, it is not surprising why I chose this stance. My great grandmother was killed in Babi Yar, while many other family members died or greatly suffered by the hands of Nazis during World War II.

However, victim-hood wasn’t the only war narrative my family passed on to me. As far as I can remember, my grandfather always told me stories about his experiences as a soldier during WW II and the tough times that he endured to achieve victory. This included the final battle in Berlin, in April/May 1945, where he helped to win the war against the Nazis.

While I grew up with extremely negative feelings towards Germany, I was also curious. Curious about the people who lived there during the war and what made them do the horrific things that they did. Curious about the people who live there now and if they feel differently towards Jews. That’s why, when I heard about the Germany Close Up trip with COJECO, I first hesitated, but then decided to join the program with the hope that the country I would encounter would be vastly different from its dark past.

On the very first day, our group walked towards the Brandenburg Gate, in Berlin, and I couldn’t help but consider the surreal nature of the experience. These were the streets where my grandfather fought in World War II to liberate the world from Nazi Germany. Nazis didn’t want Jews to live in Germany or to be alive at all. Yet, there I was, standing there, a Jew and a free person. At that moment, I felt an even deeper level of gratitude to my grandfather and everyone else who fought in WWII for freedom, justice and peace.

As I was exploring Germany, I was very surprised by the dichotomy of what I encountered.

On the one hand, I quickly learned about the most recent rise of extremists and the continued deep prejudice against Jews that polls reveal is held by 20% of the country. Several tour guides explained that the rest of the Germans, who find the genocidal policies of the Nazis reprehensible, believe that ordinary people were brainwashed and simply followed orders. This is how German citizens currently rationalize the actions of the Nazi soldiers even though the consequences of refusing to kill a person weren’t as severe as people imagined. Yet, as a tour guide explained, 95% of Nazis chose to kill an innocent human being rather than being relegated to administrative work.

And, on the other hand, in my individual encounters, I met wonderful German people, who turned out to be friendly, kind, and open about the complexities of their country and heritage. They tried to be extra nice with our group and sensitive to all of our needs. I also saw a country filled with beautiful European architecture and scenery, not just the gray depressing houses that I expected to see on every corner. And seeing this side of beauty and kindness in Germany gave me hope.

One evening, we had dinner with a group of young Germans. The girl sitting across from me said, “You are the first Jew I am talking to.” I responded by saying, “You are the first German I am talking to.” It didn’t take me long to jump to the main questions that were swirling in my mind, “What does she think about the Holocaust? What role did her ancestors have in it? What does she think about rising antisemitism in Germany?” The most surprising answer to me was when she stated, “It happened so long ago and I have nothing to do with it, so I feel that it happened in a different country with different people. I don’t think much about it and it doesn’t have a big place in my life.” This perspective is the complete opposite of the experience that I have as a Jew — this is an integral part of my family narrative and I am constantly reminded of it. Even though the Holocaust happened several generations ago, the stories that are passed down and the impact that it had make me feel that I am intimately familiar with every detail of the past. I could never forget what happened. I explained this to the German girl and we both acknowledged the contrast that we are experiencing in dealing with the horror that happened.

We then proceeded to share our views on modern society, on being career women, on the challenges of finding work-life balance and the pressure to be successful in all aspects of life. We quickly realized that we had much more in common than we originally thought. By the end of our conversation, we were both close to tears and the German girl said, “I am sorry for everything that happened. I am glad that you came here and that you are giving Germany a second chance.”

I thought about what she said and about the dichotomy that I saw in the current German society. I hope if German people ever again face the choice between aggression/fascism and peace, they will show that they learned from the lessons of the past and will choose morality, kindness, and empathy to everyone. I believe this is the recipe for peace and coexistence for all of us. So here I am, giving Germany a second chance. 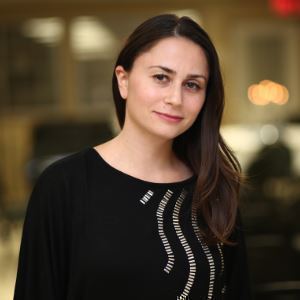 Wexner Heritage Alum Yelena Kutikova (New York RSJ 16) was born in Kiev, Ukraine and immigrated to the US in 1999 with her parents and sister. She received a BA in Psychology from Brooklyn College and a Masters in Organizational Psychology from Columbia. She is Director of Learning and Development for UJA Federation and has broad leadership experience. Passionate about building strong Jewish community she is active in the PA of Mazel, where her daughter attends, and at Jewish Parent Academy (JPA) for Russian Jewish parents.